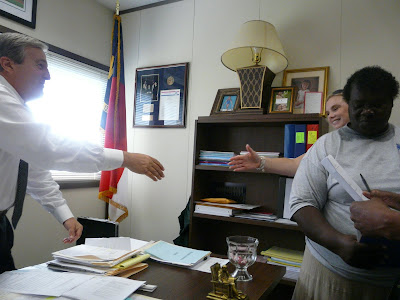 On Tuesday at the NC General Assembly, Sen. Don Vaughan seemed to be lord of the animal kingdom. One moment, he was running a bill to enhance sentencing for people that heinously torture and abuse animals. The next he was shepherding a surprisingly difficult bill to enable the city of Greensboro to relocate beavers.

“Are you ready for the Don Vaughan show?” asked Sen. Martin Nesbitt, the Asheville Democrat who chairs the Senate Judiciary I Committee.

Vaughan, a Greensboro Democrat who is completing his first two-year term in the Senate, described the provisions of the bill, which now awaits Gov. Beverly Perdue’s signature after received a unanimous vote of approval in the Senate today. But the real star was Susie herself, the dog who is the bill’s namesake, who sat with her supporters in the front row, nuzzled her owner’s hand, flopped down on the floor, rolled over and stretched out to show off her belly to the lawmakers.

Her ears are missing and patches of missing hair spot her body, but her sweet nature and harrowing back story — in 2009, she was set on fire, left for dead and later discovered with a broken jaw and maggots covering her body — make her as effective an advocate as one could find.

Controversial and non-budget related legislation is typically not considered during the short session, which falls on every even-numbered year. Vaughan said the bill initially ran into opposition from the dog-breeding industry, whose representatives worried that its provisions could be used against people who use shock collars to train pets. But Susie’s compelling story and the popularity of the cause she represents helped knock down the obstacles.

“You’re certainly getting special dispensation to get this heard in the short session,” Nesbitt said. “We probably didn’t follow the rules, but Sen. Don Vaughan never seems to pay attention to the rules anyway.”

A former Greensboro city councilman, Vaughan was elected to fill the NC Senate seat vacated by Kay Hagan in 2008. District 27, which covers much of Greensboro, seat leans heavily Democratic.

Vaughan’s Republican challenger, Jeff Hyde, is a small businessman who helped organize this spring’s Greensboro Tea Party event. Hyde is banking on a rising tide of conservative discontent to carry him to victory in the fall.

The incumbent Democrat’s advantages are formidable, however. Vaughan’s political experience, both as an elected official and a onetime Raleigh lobbyist, coupled with an energetic and amiable personal style, have translated into a campaign war chest of $77,009. Hyde, in comparison, has not reported raising any money. The general election is scheduled for Nov. 2.

The second animal bill on Vaughan’s calendar Tuesday did not fare so well.

At the initiative of Greensboro City Councilwoman Trudy Wade, a veterinarian by profession, the city of Greensboro has requested enabling legislation to allow it to relocate beavers that are creating a nuisance by damming up North and South Buffalo Creeks. The city discovered that the beavers were being euthanized after being trapped, and has pursued a policy of harassment with mixed results.

Before heading into a Senate State and Local Government Committee hearing, where the beaver relocation bill was on the agenda, Vaughan corralled representatives of the interested parties into his office to try to hash out a viable compromise. Representing the city of Greensboro were Associate General Counsel Thomas D. Carruthers and Stormwater Manager David Phlegar. Gordon Myers and Sarah Clapp negotiated on behalf of the NC Wildlife Resources Commission.

“We’ve had problems with beaver dams,” Carruthers explained. “We’ve tried a harassment policy, which hasn’t worked. We have landowners who want to attempt to relocate the beavers. I say attempt because we know beavers have a mind of their own.”

Myers said he had already spoken to Wade about the issue, and explained why his agency would be loathe to consider allowing the city to relocate the beavers.

“With beaver management, we spend about a million dollars a year,” he said. “There’s a lot of damage to statewide to highways and private property from beavers due to inundation and flooding. The question is, who determines the suitability of the habitat? What happens when the beaver creates a greater problem when it goes off the property where you’ve moved it?”

One idea the city has explored is relocating the beavers to a site in Davidson County where property owners are willing to accept them. Myers made it clear that he was implacably opposed to any arrangement that involved transporting beavers across county lines. Another option under consideration by the city is to move the beavers to the TZ Osborne Wastewater Treatment Plant, which is within the corporate limits of the city.

It looked like the two sides were at loggerheads. While the tenor of discussion was friendly Vaughan appeared resigned.

“I guess we’ll have to move the bill through and see what the committee says,” he said.

Then Clapp asked whether the city would consider narrowing the bill to specifically list the sites from which the beavers would be removed.

“Do it on a trial basis, maybe sunset it after one year,” Myers suggested. “Establish a relationship between you and us where I help you with some engineering technologies.”

“We could put the names of the creeks in the bill,” Vaughan said. “It’s essentially North and South Buffalo Creeks. We’re at the headwaters of the Cape Fear River. We could say that they must be moved within the city limits of Greensboro. How about that?”

Reception to the bill from other lawmakers on the State and Local Government Committee was mostly mocking.

“The city of Greensboro has a problem,” Vaughan said, “and the only way it has to solve the problem is to come to the General Assembly. It’s probably not the biggest problem Greensboro has had, but it’s a problem nonetheless. Little did I know that it would be a heck of a situation with a lot of different parties. We can trap the beavers, but we can’t move them without killing them. What we are trying to do is find a solution without killing the beavers.”

The representatives of the city and the wildlife resources commission presented their respective arguments, and Vaughan pulled it before it could come to a vote, indicating he would bring it back the next week. Meanwhile, the bemused lawmakers laughed among themselves and wondered aloud why anyone would want to save the critters.

“If you’re going to move the beavers, make sure you keep them in the city of Greensboro,” said Sen. Michael Walters (D-Hoke). “We don’t want them in eastern North Carolina.”

A textile executive in his early thirties, Vaughan falls squarely in the business wing of North Carolina’s Democratic Party. He has been involved with the American Legislative Exchange Council, an organization devoted to limited government and free-market principles, since the 1980s. Yet, as a lifelong Greensboro resident, Vaughan has forged a densely woven network of alliances across a wide spectrum of ideologies, thanks to his approachable manner and interest in a broad array of issues.

On Tuesday, before the beaver hearing, the senator invited a delegation of special education bus drivers and school cafeteria workers from Guilford County that were represented by Teamsters Local 391 into his office for an unscheduled visit.

“We’re in the senator’s office — yeah!” enthused Jeannie Krulish as the group huddled around Vaughan for a picture. The handful of members went through their agenda, repeating as a mantra: “We need a voice.”

One of their demands is that the state refrain from imposing a furlough — a measure to save money by requiring employees to take unpaid leave from work.

“I’m not with you on this, as you know,” Vaughan said, before recommending that they speak with Sen. Linda Garrou, whose leadership position at the Senate Appropriations Committee gives her extraordinary sway over the question.

Vaughan likewise appeared unmoved by the drivers' argument that they should have collective bargaining rights. Unlike their counterparts in the classroom, who are represented by the NC Association of Educators, the bus drivers represented by the Teamsters say they do not receive paid training even though they are responsible for transporting students with acute disabilities.

“You might be pulled over on the side of the road in an emergency,” Krulish said. “You might have a kid that has a trach that needs to be cleaned.”

Mary Donaldson, a special education bus driver and shop steward added, “They don’t want us to come inside, but we transport the kids to and from school. They put bathrooms outside. That was just inappropriate for women. No employee should be treated that way. We need a voice.”

Reflecting on his political reputation while eating lunch in the Senate dining room, Vaughan noted that among majority white districts, his is one of the most Democratic leaning in the state. His name is a recognizable political brand in Greensboro, and he holds a reputation for being helpful and accessible.

When Kay Hagan left the state Senate to join its more august counterpart in Washington, she gave up the seniority accumulated over 10 years, including a co-chair position on the Appropriations Committee. A lawyer by profession with experience in criminal defense and real estate matters, Vaughan has landed a vice-chair position on the Judiciary II Committee and a member slot on the Select Committee on Economic Recovery, along with five other committee appointments.

In February, Senate President Pro Tempore Marc Basnight (D-Dare) appointed Vaughan to co-chair the Joint Study Committee on Alcoholic Beverage Control, which was mandated to examine local board governance and compensation, and explore the option of privatization. Vaughan and his House counterpart, Rep. Ray Warren (D-Alexander, Catawba) have held three hearings. Only one person, a lobbyist for the NC Merchants Association, spoke in favor of privatization, and the idea was scratched.

The legislation wending through the Senate and House is described by Vaughan as “a tune-up, not an overhaul.” Among other things, it limits compensation to local administrators, prohibits nepotism, and requires transparency in local board deliberations and budget adoption. The most controversial aspect of recent deliberations in the NC General Assembly has been the matter of whether the threshold for municipalities to hold referenda on establishing a state-controlled liquor store should be 500 or 5,000 registered voters. (The Christian Action League favors the higher number, but bill current language leaves the threshold at 500.)

On Tuesday, the Judiciary II Committee heard a summary of the bill from Vaughan, along with mostly favorable comments from a bevy of lobbyists, but did not take a vote. Later in the same day, Vaughan sat in on the House State Government/State Personnel Committee hearing on the bill. Rep. Winkie Wilkins (D-Durham), who chairs the committee, almost forgot to recognize Vaughan, who left for a Senate floor session before the committee approved the legislation. The bill is scheduled for a final House vote tomorrow.

“I was pleased to be selected as co-chair of Alcohol Beverage Control,” Vaughan said. “It is one of the hot issues. To be able to work with the various groups — county commissioners, ABC boards and the Christian Action League — and come up with something that makes everybody happy is a great thing.”