Board member: No ‘devils’ in Forsyth elections system 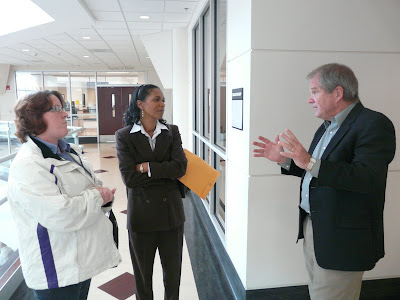 The Forsyth County Board of Elections signaled a readiness to close the book on allegations of election law violations today after completing a month-long investigation.

“I’m concerned that this whole incident has made some people maybe feel less confident in the fairness of the election process,” Democratic member Frank Dickerson said after the meeting. “I am, having looked at it as thoroughly as I could, am very confident that the election process here is fair and above board and open. There are no intentional violations, which doesn’t mean that there can’t be a mistake occasionally.”

The three-member board voted unanimously to approve a formal statement “that we have looked at all the allegations of alleged voter fraud and we have found no credible evidence of intentional violations of the voting laws.”

Democratic Chair Linda Sutton said the board also looked into and discussed all allegations of employee misconduct brought to its attention that are protected from public disclosure by state personnel law. In 2008, a seasonal worker named Deena Head said that Elections Director Rob Coffman called her a “crack ho” in front of other people in the office. Coffman has denied making the statement attributed to him, but acknowledged that what he said was out of line and that he was ordered to undergo a racial sensitivity training. More recently, another former employee, Rebecca VanderKlok, charged that Coffman referred to her as a MILF, a disparaging term for a mother who is considered sexually attractive. The board extensively interviewed employees in an effort to determine whether a hostile work environment exists in the office.

The board spent about an hour and 15 minutes in closed session to review Coffman’s competence and performance and to consider complaints about his management of the office. That the board took no action on Coffman’s employment means that he will continue in his position as director.

“Probably one of the most frustrating things is the logic of this,” Coffman said after the meeting. “I don’t particularly care who gets elected; I really don’t care. To think I would risk my career to help a candidate commit fraud is beyond idiotic. Look at all the people bringing allegations. They have one common denominator: They lost. They lost an election or they lost a job. And they’re looking for justification.”

The board had heard statements alleging misconduct in the office under Coffman’s leadership from four former employees and seasonal workers, along with two unsuccessful candidates, during a public meeting earlier this month.

Dickerson expressed frustration today with the tenor and substance of their claims.

“I’m just very concerned about the witness of the people that came forward,” he said. “To assume that there was something nefarious going on every time there might have been a disagreement about a residence or a late return of things — you need to look into those things, there’s no doubt about it — but to assume up front that there’s got to be some kind of organized conspiracy every time you see something, I thought was out of bounds, personally.”

The concerns arose based on statements by former employees and seasonal workers suggesting that the elections office did not take proper precautions to ensure that Winston-Salem State University students were voting in their proper precinct during the 2009 primary, which resulted in the election of student Derwin Montgomery to Winston-Salem City Council. Those concerns were compounded by an official report in December 2009 that “a large mailing of voter registration cards” had returned from Winston-Salem State University, raising questions about whether students who registered and voted in the election actually lived on campus.

In another matter that prompted questions about whether election law had been violated, PJ Lofland, a former seasonal worker, told board members earlier this month that Deputy Director Lamar Joyner ordered her to allow a woman to vote in the Winston-Salem election who had admitted that her residence at the time was in Walkertown. Joyner acknowledged before the board that he overruled Lofland based on the fact that the woman was registered with a Winston-Salem address.

Most of the remarks in the open portion of the meeting today were made by Dickerson, who addressed three specific areas of concern.

Former employees have questioned whether the office under Coffman’s direction violated federal law by having election servers networked, both in a 2008 incident in which the director remotely accessed a server from an off-site conference to catch up on some work and as an ongoing practice.

“They did have an issue earlier here with the use of a VPN connection into the network to access that program remotely from outside the office,” Dickerson said, adding later: “The State Board [of Elections] asked us not to do that after they found out that we had done it. That practice has stopped. We no longer have any access to the Unity program on our network remotely through an internet connection.”

Some software is networked within the office, he added.

“In our case, the Unity software is accessible by three of our employees here and it’s limited to that,” Dickerson said. “What that means is, they can work at their computer stations here in the office on that particular piece of software when they desire and don’t have to go to a dedicated station for that software.

“I have personally talked to people at the state board,” he added, “and they understand that and approve of that practice.”

Dickerson said the possibility that hundreds of Winston-Salem State University students had voted illegally in the 2009 primary was a “grave concern,” adding that “it’s somewhat unfortunate that every time there is a small issue in procedure that we look for all the devils.”

Forsyth County voter records indicate that 196 people registered and voted during early voting prior to the 2009 primary in Precinct 405, which includes the Winston-Salem State University campus. Elections staff reported to the board that out of the 196 early voters, seven had verification cards returned as undeliverable, raising questions about whether they were indeed living on campus and in Precinct 405 at the time they voted.

Last week, Chris Duffey, IT support technician for the board of elections, e-mailed Carmen Berrier, a university employee, the names of the seven students and requested that she confirm that they had been living on campus during the period of August-October 2009. Early voting in the primary took place in September of that year.

Berrier indicated that all seven lived on campus at the time.

Dickerson attributed the fact that seven verification cards were returned as undeliverable to a delay by the postal service at the university.

“There was not a single vote by any voter whose card was returned in the election at issue,” he said. “So yes, it’s regrettable they sent them late. There was obviously no organized fraudulent activity around that. It’s bumble and not devil.”

The board also dismissed a claim by Pamela Johnson and other former employees that they were ordered by Coffman to alter voter registration information by entering the date Jan. 1, 1900 into a computer database as a way of tricking the computer into accepting the registration in cases where they had no valid date of birth on file.

“Since the year 2000, the research showed that there were three instances that people were registered and the date 1/1/1900 was put on their applications in the process,” Dickerson said. “The one instance that that happened since Rob has been here, I think Pam had entered that.

“Again, not the stuff of organized election fraud, but possibly a mistake,” he added. “As I said, we tried to look at this and what we find is a lot of heat, but there’s no fire there.”

After the meeting, Johnson stood behind her claim.

“I know we were told to use that default date of birth in 2008 in order to speed up the process of entering voter registrations,” she said. “It was an announcement to the staff, and not administered individually.”

It’s common to find voters who registered from the late 1950s to the early 1970s that are on record as being 111 years old, and a birth date was not required for a valid voter registration at one time. Staff on both sides of the Forsyth elections controversy say there are many so-called legacy voters whose proper birth dates are not on record from before the time when election records were computerized in the 1990s. Johnson acknowledged that former employees have not been able to produce evidence of significant numbers of voters on the rolls who were registered with the default birth date after Coffman took over as director.

“I would like to think there was an honest effort to bring them up to date by having the voter make that update with their signature,” Johnson said, “but I don’t know if that is the case.”

Discussing the controversy that has surrounded his office for the past month or so, Coffman wore an expression of relief that his board has closed its investigation. He said he is looking forward to testing some new processes this year, in which the county’s smaller municipalities will have elections, in preparation for next year’s presidential election. He said he expects early voting to be even more popular in 2012 than in the last presidential election, and he is looking for ways to establish new early-voting sites to relieve pressure on Election Day.

He spoke confidently about the collective mood in the office.

“We have a current staff that enjoy the work, and enjoy being in this office,” Coffman said. “The complaints come from former employees who — maybe they’re former for a reason.”

Dickerson indicated that the board, too, is ready to turn the page.
“We are ready to close this issue, which doesn’t mean we’re not ready to hear if things happen in the future and there’s additional evidence — we’ll look at it,” he said. “We took all these very seriously and we looked at them closely, and tried to disentangle the evidence. In all of the major issues where we could get to it, we found there was nothing there.”