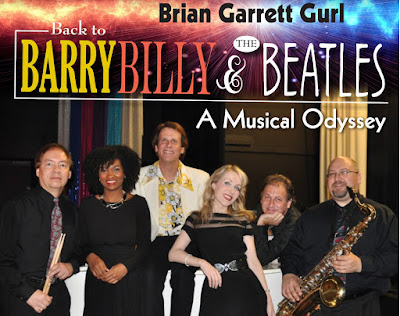 Arrangements of some of the most popular Barry Manilow, Billy Joel, and Beatles tunes, Sun., Mar. 6

"High Point, NC – A fusion of "musical tribute" and "artistic powerhouse," pianist-vocalist Brian Gurl, together with a world class 5-piece band, offers creative arrangements of Beatles classics, along with expressive renditions of both Barry Manilow hits and Billy Joel favourites in this colorful and entertaining production “Back to Barry, Billy and The Beatles – A Musical Odyssey.” Coming to the High Point Theatre on Sunday, March 6, at 3:00 pm, expect to hear such top hits as Eleanor Rigby, Can't Buy Me Love, Copacabana, Piano Man, I Write The Songs, and many others.

Brian Gurl is a creative force, with a sublime understanding of different musical styles, unstoppable energy and the natural talent to surprise, and delight, listeners with his unexpected musical arrangements. Add Brian’s theatrical influences – a costumed Gurl alternating among Barry Manilow, Billy Joel and The Beatles (backed by his band) - and you have all the makings of a highly entertaining and riveting production. "Brian does it all from pop to classical, razzle-dazzle to romantic. Brian is a trained pianist but also a super pop singer, mimic, imitator, jokester, dancer and creator of programs," writes the Englewood Sun, Englewood Florida.

The piano has been a part of Gurl’s life as long as he can remember. Piano lessons starting at age six, he was playing, by ear, many of the popular songs and melodies he heard on radio and television by the time he was eight. Fast forward to today to find that Brian’s musical abilities on piano include diverse genres of music including ragtime, jazz, blues, pop, rock n roll, Broadway and old standards as well as classical and semi-classical. “Focusing on one style of music was never good for me,” Gurl said. “I wanted to learn a little bit about everything.”

Brian’s performing experience is extensive as well. He has performed at many premier resorts and hotels in the northeast as a solo pianist, spent five years in a dance band, four years in the Woodstock (VT) Jazz Quintet and many years in musical-comedy theatre. Brian is also a very talented singer with over ten years of training, and several years of study in theater and dance.

Gurl splits his time living in North Carolina and Florida, but spends a good deal of it traveling around the country with his wife, Joey, performing the variety shows he has used to make a name for himself these past several decades.

“Back to Barry, Billy and The Beatles – A Musical Odyssey is one of those classic feel-good, sing-along shows,” says High Point Theatre Director David Briggs. “Although the audience may know the songs, they’ll be surprised by Gurl’s entertaining interpretation of many of these most popular tunes.” Tickets are $20-$25, available at the box office by calling (336) 887-3001 and online at www.highpointtheatre.com.


About High Point Theatre
Owned and operated by the City of High Point, the High Point Theatre is conveniently located within
the International Home Furnishings Center at the corner of Commerce Avenue and Hamilton Street
in High Point. The Theatre features an elegant 965-seat auditorium with continental style seating,