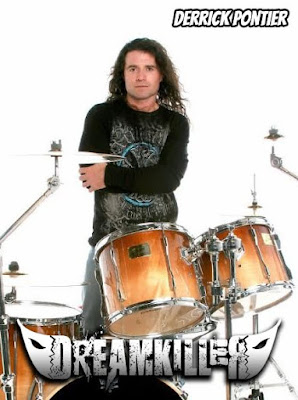 "Dreamkiller is pleased to announce the addition of world touring drummer, Derrick Pontier of Huntington Beach, CA.  Playing drums for over 30 years, he has toured the USA, Canada, Europe, Japan, Singapore and more.  Derrick joined American Hard Rock band Great White in 2001 and played with them through 2005, as well as Jack Russell’s Great White from 2011 through 2014.  He is featured on the 2001 live record “Thank You…Goodnight!”.  Derrick also toured the United States and United Kingdom as a member of Poison guitarist, CC Deville’s solo project, Samantha 7.  He has performed with numerous other bands featuring allstar members, such as Angel’s Frank DiMino and Stryper’s Oz Fox.  As a session drummer, Derrick has recorded on various projects, including Warrant guitarist, Joey Allen’s solo album.

Dreamkiller is a full time nationally touring melodic hard rock band that presents elements of soulful melodies, jazzy harmonies, catchy rock hooks and prides themselves on colorful lyrics that include positive themes of strength, perseverance, conquering your fears head-on, as well as pushing with no limits to accomplish your goals. The band was founded in 2004 by triple threat, Christy Johnson [2010 Los Angeles Music Awards National Female Vocal Performer of The Year], who has been featured in such films as "Tobe Hooper's Mortuary", "National Lampoon's Pucked", and is starring as Judy Hartley in the upcoming re-imagining, "Night of The Living Dead: Genesis". On lead guitar and backing vocals is seasoned industry veteran, Scott LaFlamme, of Springfield, MA. Scott is most known for his work as the lead guitarist for national act, "Bang Tango", with whom he toured from 2010 – 2014, as well as "Randy Rhoads Remembered" tribute events.  He is endorsed by InTune Guitar Picks, Gibson & Spector Guitars, D’Addario Strings, and Rock N’ Roll Gangstar Clothing.  Chaise Elliott is a veteran of the Memphis, TN hard rock and metal music scene. With over 14 years of experience on guitar and bass, he is a multi-talented asset to Dreamkiller.  On bass and backing vocals is Jason Cornwell (Boston Bassman), who is most known for playing in "Mr. Big’s Eric Martin" as well as countless tours with bands such as "Dokken". He is currently endorsed by Brubaker Basses, SIT Strings, Ernie Ball, Vivid Amps, and most recently EBS Professional Bass Equipment.

Dreamkiller is also proudly sponsored by COLDCOCK Whiskey, and Curt Mangan Strings. They have shared the stage with such notable acts as Lacuna Coil, Gemini Syndrome, Zach Myers of Shinedown, In This Moment, Saliva, Upon A Burning Body, 12 Stones, Mushroomhead, Butcher Babies, and many more.  Music from Dreamkiller has received placement in 12 different films so far, many of which have been released worldwide and have been awarded numerous accolades. Dreamkiller is currently recording their second full length concept album, entitled "11:11". With a plethora of U.S. national tours under their belt, and with the recent lineup additions, they have future plans to span their travel worldwide.