Last fall, the 75th National Folk Festival attracted more than 102,000 attendees to downtown Greensboro for the FREE, three-day weekend. Based on survey data, organizers expect attendance to grow substantially in 2016—by as much as 30% or more. 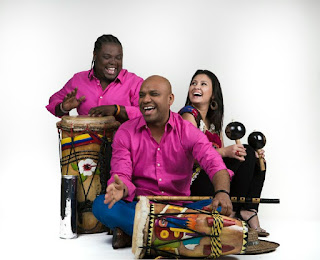 Approximately 300 artists—musicians, dancers, storytellers, and craftspeople—will take part in the National Folk Festival, with more than 30 different musical groups performing on as many as seven outdoor performance venues throughout downtown Greensboro. The three artists announced today include:

·      Jeffery Broussard & the Creole Cowboys – Zydeco: Standouts in the zydeco scene, this band delivers pack-the-floor renditions of Creole classics as well as their own rollicking brand of traditional zydeco. The group is led by accordionist and vocalist Jeffery Broussard, one of today’s most influential zydeco musicians.

·      Grupo Rebolú – Colombian: Playing the rich, rhythmic, and undeniably danceable music of Colombia’s Caribbean coast, Grupo Rebolú is the preeminent Afro-Colombian ensemble in the United States. People of African, Spanish, and indigenous descent have been intermixing for centuries along Colombia’s Caribbean coast, resulting in a rich blending of cultures. Reflecting this, Grupo Rebolú sings in Spanish, performs on a mix of indigenous, African, and modern instruments, and causes an irresistible urge to get up and dance.

·      Sahba Motallebi – Persian: Sahba Motallebi is a modern virtuoso of the tar and setar, lute-like stringed instruments central to Persian classical music, which became central to Iranian identity in the early 1900s. In post-revolutionary Iran, learning and performing traditional music was frowned upon—especially for girls—but Sahba and her sisters studied music as children in their hometown of Sari, a small seaside city in the north of Iran. Sahba was recognized as the Best Tar Player at the Iranian Music Festival for four straight years, beginning in 1995 when she was 16. She left Iran in 2003 to pursue graduate studies, and now lives in Los Angeles, which is home to a vibrant Iranian exile community.

These outstanding artists join the following performers, who have already been announced:

To learn more about these artists, their traditions, and their stories, please visit nationalfolkfestival.com/performers. Throughout the spring and early summer, the National Folk Festival will feature individual artists on its Facebook page (Facebook.com/NationalFolkFestivalNC) and on social media:
·      #NCFolkFest
·      Twitter: @NtlFolkFestNC
·      Instagram: NationalFolkFestNC
·      YouTube: National Folk Festival NC
More performers will be announced as they are confirmed.

About the National Folk Festival: Since it was first presented in St. Louis in 1934, the National Folk Festival has celebrated the roots, richness, and variety of American culture. Championed in its early years by Eleanor Roosevelt, it was the first event of national stature to present the arts of many nations, races, and languages on equal footing. An exuberant traveling festival that embraces the diverse cultural expressions of the American people in the 21st century, the National Folk Festival is FREE to the public, and is produced by the National Council for the Traditional Arts (NCTA) in partnership with communities around the country.
About the National Council for the Traditional Arts (NCTA): The National Council for the Traditional Arts (NCTA) is one of the nation’s premier non-profit cultural organizations dedicated to the presentation and documentation of folk, tribal, and ethnic arts in the United States. Founded in 1933, it is the nation’s oldest producing and presenting organization with such a focus. Its programs celebrate and honor deeply rooted cultural expressions—music, crafts, stories, and dance passed on through time by families and communities as well as by tribal, ethnic, and occupational groups. The NCTA stresses excellence and authenticity in presenting artists to the public in festivals, tours, concerts, media programs, exhibitions, recordings, and other activities, and works in partnership with communities across American to establish new, sustainable traditional arts events that bring lasting social, cultural, and economic benefits. www.ncta-usa.org

About ArtsGreensboro: With an annual budget of approximately $4 million, ArtsGreensboro is a catalyst for innovation to build recognition and support for the arts. Through its ArtsFund-supported grant programs, the 17DAYS Arts & Culture Festival, the Levitt AMP Greensboro Music Series, I HEART ARTS Month, and other opportunities including the National Folk Festival, ArtsGreensboro is driving the health and vitality of our community by supporting arts education, celebrating the diversity of Greensboro, and driving economic impact through excellence in arts programming. artsgreensboro.org"