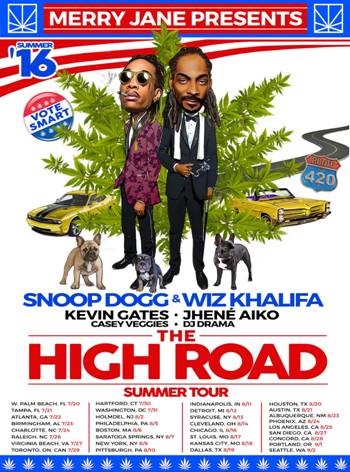 Snoop Dogg and Wiz Khalifa will be performing live with special guests Kevin Gates, Jhene Aiko, Casey Veggies and DJ Drama on July 24 at PNC Music Pavilion in Charlotte and July 26 at Walnut Creek Amphitheatre in Raleigh.  Fans will have early access to a special pre-sale on MERRY JANE starting Tuesday, April 5 at 10:00 a.m. local time through Thursday, April 7 at 10:00 p.m. local time. Visit www.MERRYJANE.com for details.  Tickets for the general public  go on sale Friday April 8 at noon at livenation.com, via the Live Nation mobile app, the venue box offices, Ticketmaster, and by phone 800-745-3000.

Well known as kindred spirits for their creative collaborations in music and film, Snoop and Wiz are taking 'The High Road' this summer together on a nationwide tour. The duo will take the stage for the first time together in a one-of-a-kind joint performance, ripping back-to-back through all their hits, new songs, and smash collaborations like “You and Your Friends” and the Grammy-nominated anthem “Young, Wild and Free.” Music fans will experience a special summer tour filled with positive energy and hot music as Kevin Gates, Jhene Aiko, Casey Veggies, and DJ Drama join Snoop and Wiz to take the 'The High Road.'

Multi-platinum artist, actor and entertainment icon Snoop Dogg is at the forefront of popular culture with award-winning albums and songs, multiple films, lifestyle products, philanthropic efforts, and digital ventures. Snoop Dogg has sold over 35 million albums worldwide and received multiple GRAMMY® nominations. Since 1993, he has released thirteen albums and collaborated with artists across all genres of music. Snoop’s musical catalogue include some of the biggest songs in the world, including “Gin and Juice,” “Drop It Like It’s Hot,” “Snoop Dogg (What’s My Name)” and “Beautiful.” Snoop Dogg has performed around the world for more than 20 years, including his notorious Coachella headlining show where he performed alongside Dr. Dre and the Tupac hologram. Snoop Dogg is currently working on his upcoming album, High Definition, coming out summer 2016.

A visionary and entrepreneur, Snoop Dogg’s brand spans across technology, business and consumer verticals, even gracing the cover of AdWeek as a “Tech Mogul.”  One of the world’s most recognizable cannabis icons and pioneers, he recently made history as the first celebrity to have his own branded line of cannabis products, “Leafs By Snoop,” which includes hand-weighed flower, concentrates, and edibles and are currently available in dispensaries throughout Colorado. For more information, visit www.snoopdogg.com or follow him on socials @SnoopDogg.  Snoop Dogg defines entertainment history.

Multi-platinum selling, Grammy and Golden Globe nominated recording artist Wiz Khalifa burst onto the scene with mainstream success with the release of his first major label debut, Rolling Papers‎ in 2011. ‎Rolling Papers spawned the hugely successful hits “Black and Yellow,” “Roll Up” and “No Sleep” and gave Wiz the platform to win the award for Best New Artist at the 2011 BET Awards and Top New Artist at the 2012 Billboard Music Awards. His sophomore studio album, Blacc Hollywood, ‎debuted at #1 on Billboard’s Top 200 album chart and featured the hit single "We Dem Boyz." Soon after Khalifa's track,‎ “See You Again,” off the FURIOUS 7 soundtrack, catapulted to the top of the charts across 95 countries. Holding the #1 spot for 12 consecutive weeks, “See You Again” broke records by being Spotify’s most-streamed track in a single day in the United States and in a single week in 26 countries. In addition to winning 3 Teen Choice Awards in 2015, “See You Again” continued its success by winning a Critics’ Choice Award in the category Best Song, earning three Grammy Award nominations in the categories Song of the Year, Best Pop Duo/Group Performance and Best Song Written for Visual Media, and a Golden Globe nomination in the category Best Original Song – Motion Picture. Wiz released his album Khalifa in February of 2016 as a thank you to fans which includes the tracks “Bake Sale” featuring Travis Scott and “Zoney” for which he recently premiered a new video. He is currently preparing to release a new studio album this summer called Rolling Papers II.

More than just a music powerhouse, Wiz is also a fashion-forward icon and entrepreneur. His Taylor Gang Ent. label and brand and has collaborated with a variety of lifestyle brands including Neff and Converse, launched their own Freshko, a new lifestyle brand co-created by Sketch, a well-known graphic artist from San Francisco. Additional highlights include partnerships with luxury headwear designer Flat Fitty, RAW® rolling paper (www.rawthentic.com) and RiverRock Cannabis.  For more information please visit www.wizkhalifa.com.