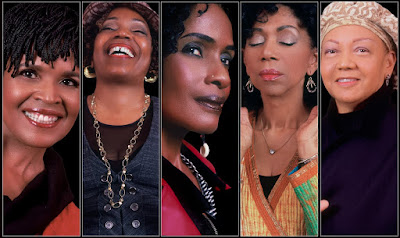 An Evening of Song, Enlightenment and Empowerment scheduled for Saturday, May 14

"High Point, North Carolina – Rooted in a deeply held commitment to create music out of the rich textures of African-American legacy and traditions, Sweet Honey in The Rock has diligently set out to educate, entertain, and empower its audience and community, now well into its fourth decade. On Saturday, May 14, the Grammy Award winning ensemble will share its stunning vocal prowess with Triad residents when it comes to the High Point Theatre for a single live performance. Concert will get underway at 8:00 pm.
Formed as a quartet in 1973 at a workshop at the D.C. Black Repertory Theatre Company in Washington, the founding members - Dr. Bernice Johnson Reagon, Carol Maillard, Louise Robinson, and Mie - drew their name from the first song they learned, “Sweet Honey in the Rock,” based on a Biblical psalm. “Sweet Honey speaks of a land that is so rich when you break the rocks open, honey flows. And we thought it was something like us African-American women . . . strong like a rock, but inside [there’s] honey – sweet,” explains Robinson.
With current members – Carol Maillard, Louise Robinson, Aisha Kahlil, Nitanju Bolade Casel, and Shirley Childress – Sweet Honey captures the complex sounds of blues, spirituals, traditional gospel hymns, reggae, African chants, ancient lullabies, and jazz improvisation, often accompanied by hand percussion instruments, producing a sound filled with soulful harmonies and intricate rhythms. The group educates, entertains and empowers its audience and community through the dynamic vehicles of a cappella singing and American Sign Language interpretation, preserving and extending the traditions of African American vocal music while inspiring others to find and use their individual and collective voice to address the critical issues of our time.
The ever-growing list of Sweet Honey’s musical and activist achievements since its creation is stunning. The group has appeared at various festivals in the US and Canada, including the Smithsonian Festival of American Folklife at the National Mall in Washington. After the 1976 release of its first album, the group expanded its touring and, in of 2011, joined other muse musicians (Bonnie Raitt, Crosby, Stills & Nash, et al) in a benefit concert for disaster relief efforts in Japan. The ladies have performed in Nairobi and Beijing at the U.N. World Conference on Women, toured extensively at home and abroad, and been the subject of two PBS documentaries “Gotta Make This Journey” and “Sweet Honey In The Rock®: Raise Your Voice.” They have recorded film soundtracks, received Grammy nominations for several of their albums for children, shared a Grammy Award for their participation in a multi-artist tribute record to Woody Guthrie, appeared in a PBS special on the first national observance of Martin Luther King Day and performed at the unveiling ceremonies for the monument for Dr. King on the National Mall, provided the lyrics for composer William Banfield in their first orchestral collaboration, and co-wrote, co-recorded and released (on their own label) a thought-provoking single and video, “Are We a Nation,” resulting in a Gold Songwriter Award from the 27th Mid-Atlantic Song Contest.
“It’s an honor to present this Grammy Award winning ensemble to our patrons this season,” says High Point Theatre Director David Briggs. “Sweet Honey delivers a fabulous entertainment experience with bonus educational factor!” Tickets are $35-$45, available at the box office by calling (336) 887-3001 and online at www.highpointtheatre.com."