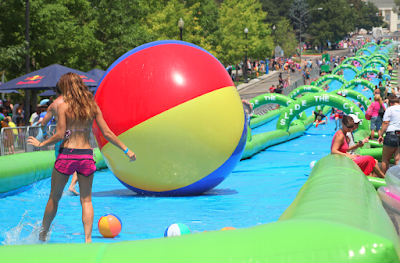 "GREENSBORO, NC – Slide the City is starting their 2016 season strong when they come to Greensboro on Saturday May 21. With over 50 events already scheduled for this year, event organizers are excited to kick-off the season in North Carolina.

“Slide the City is a one-of-a-kind event,” said Slide the City spokeswoman Amy Gessel. “Greensboro is the perfect place to begin our 2016 tour.”

“Slide the City is a full day event,” said Slide the City event director Brad Behle. “We added the block party to give the event more of a community feel.”

A portion of event proceeds will be donated to the synerG young professionals. synerG is actively seeking volunteers to help with the event. Volunteers will serve a event. Contact Hillary Meredith at hmeredith@actiongreensboro.org to receive more information about volunteering or visit the following link. http://www.signupgenius.com/go/10c0a4fa9ac2aa6fd0-slide

Online registration for Slide the City Greensboro is now open at http://www.slidethecity.com/location/greensboro/. Participants can purchase a single, triple, ultimate or all day slider pass during a selected wave time and are encouraged to sign up at before event day for a discounted rate.

About Slide the City
The first event of its kind, Slide the City has seen massive growth since its beginnings in 2014. The 2015 summer tour stopped in over seventy cities around the world, and this year Slide the City is on track to produce more than 100 events. The family-friendly company brings its massive slides to locations from coast-to-coast. With music, local vendors, activities and more, city streets are transformed into the biggest block party of the summer.


synerG, under the umbrella of Action Greensboro, is an active organization of young adults who lead initiatives to attract, engage and connect young professionals to Greensboro. This non-profit organization promotes social and professional networking, leadership opportunities and community involvement for 21-39 year-old young adults. synerG values the creation of opportunities and atmospheres that promote connectedness, diversity/inclusiveness and accessibility."