An anonymous but reliable source tells me that Urban Hotel Group and Elm Street Center LLC have agreed to forgo the recovery zone facility bonds green-lighted by the Greensboro City Council and the Guilford County Commission because they missed an April 15 deadline set by the state.

The planned downtown luxury hotel appears to be dead in the water.

UPDATE: Contrary to my projection, Bridget Chisholm, a principal of the Urban Hotel Group, tells me: "We are moving forward. We think it's a great project."

"The state of North Carolina has an allocation in its pool," she said. "Any developer that has a viable project can go after an allocation."

Chisholm told me that her group can apply for an allocation from the state pool directly from the NC Department of Commerce website. It's unclear to me how a private developer can apply for allocation without approval from the local bond authority because the application asks for the "name of the governmental entity requesting reallocation." Maybe I'm missing something.

UPDATE 2: I had expected to find information about the developers' agreement to forgo local allocation of recovery zone facility bonds in the case file for a civil lawsuit at the Guilford County Courthouse. It appears that the document described to me is a private communication between the parties in the lawsuit. A second anonymous (and knowledgeable) source questioned my conclusion that the project is dead in the water. In the future, I'll probably proceed more cautiously.

UPDATE 3: The following 2-page document has been obtained by YES! Weekly: 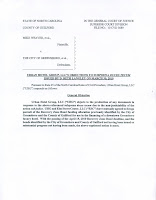 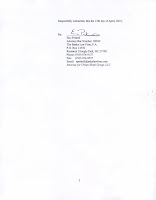