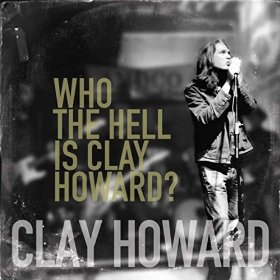 The concert, billed as "the Camel City Takeover," features three bands from the Winston-Salem area: The before mentioned Clay Howard & the Silver Alerts, Luxurious Sedans, and Doug Davis & the Solid Citizens.

"When I was putting together the bill for this show, I thought of the other 2 bands I would love to see, and asked them to be a part," said Clay Howard. "These three bands represent but a small part of the rich music scene in Winston-Salem, and we are happy to bring this slice of that to Greensboro."

Clay recently released the 10 song collection entitled, Who the Hell is Clay Howard, which is available at all the usual online retailers, as well as via either of Clay's websites: www.clayhoward.com or www.thesilveralerts.com.

Tickets are available at: www.carolinatheatre.com"

Email ThisBlogThis!Share to TwitterShare to FacebookShare to Pinterest
Tags: 17Days, Clay Howard, Who the Hell is Clay Howard