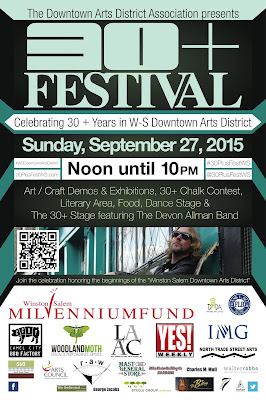 The 30 + Festival, to be held Sun., Sept. 27,  from noon until 10 PM, will celebrate the founding of studios on 6th and Trade Streets during the early 1980's by a handful of artists and guided by visionary artist Ron Propst and wife Tamara Propst. This pioneer effort was the seed for what has become the Winston-Salem Downtown Arts District. The Arts District has continued to grow into the vibrant and eclectic mix of galleries, studios, shops, businesses and residences, saturated in the arts and the arts life, that is found today along 6th, Trade and Liberty Streets.

The Downtown Arts District Association (DADA), Is another product of those early group efforts and is the coordinating organization for 30+.

Plans for the festival began in the fall of 2015 and will include visual, performing and literary arts by Arts District Artists - The Dance Stage to showcase various types of movement, a Literary area with readings, booking signings and more, extensive Art and Craft demos and Exhibitions by galleries and artists studios, some of which are opening especially for the festival, Food & Beverage areas by district restaurants and bars, food trucks, The 30+ Chalk Contest on Liberty St with adult & youth categories a film and image screenings by district artists and the 30+ Stage located in the intersection of 6th and Trade featuring headliner The Devon Allman Band, son of legendary bluesman, Gregg Allman.

www.30plusfestws.com includes a complete page on

PICTORIAL POST MARK in honor of The 30+ Festival - United States Post Office - get your mail stamped with a special post mark !
·
Participating BARS offering special hours during the festival
The Garage -  Kick Off Party Saturday 26th
AND Open from 6-10 PM Sunday 27th