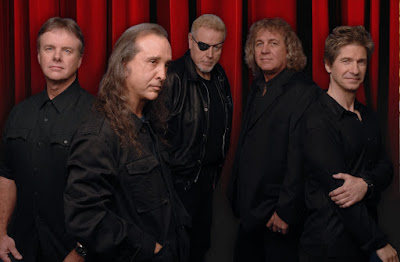 "Greensboro, NC (January 11, 2016) - As part of their 125th anniversary celebration, Greensboro-based Cone Denim is proud to present a live performance by KANSAS. The multi-million selling band will perform at the Cone Denim Entertainment Center in their only Carolinas appearance on Wednesday, April 6, 2016, having spent more than four decades as a part of the soundtrack of the lives of multiple generations of music lovers.

The band’s first public statement appeared on their self-titled album in 1974. "From the beginning, we considered ourselves and our music different and we hope we will always remain so." Little did this legendary rock group realize that back in the early ‘70's, what seemed to be “different," was actually ahead of its time.

This "garage band" from Topeka released their debut album in 1974 after being discovered by Wally Gold, who worked for Don Kirshner. The band has produced eight gold albums, three sextuple-Platinum albums (Leftoverture, Point of Know Return, Best of KANSAS), one platinum live album (Two for the Show), and two one million-selling gold singles, ‘Carry On Wayward Son’ and ‘Dust in the Wind.’ KANSAS appeared on the Billboard charts for over 200 weeks throughout the ‘70's and ‘80's and played to sold-out arenas and stadiums throughout North America, Europe and Japan. ‘Carry On Wayward Son’ was the #2 most played track on classic rock radio in 1995 and went to #1 in 1997.

Coinciding with the celebration of their 40th anniversary, the band KANSAS, was inducted into both the Kansas Hall of Fame and the Georgia Music Hall of Fame as recognition for their achievements from both their native state and adopted home state.

Along with touring, KANSAS continues to remain a fixture of Classic Rock radio and has reached a whole new audience through their unmistakable presence on the popular video games Rock Band and Guitar Hero, and through their songs inclusion in various television shows such as ‘Supernatural,’ and ‘South Park,’ and with films ‘Old School,’and ‘Anchorman.’

The Cone Denim Entertainment Center is proud to present artists such as KANSAS. Featuring state-of-the-art audio and amenities in an intimate setting, the downtown theater is the ideal venue to enjoy an evening with a music legend. Come experience what everybody is talking about at the newest performance venue in the Triad. With balcony seating that puts the audience virtually right over the stage, the Cone Denim Entertainment Center provides an unforgettable experience.

Tickets for the Kansas performance be on sale Friday January 15 at all TicketMaster outlets, or online at www.cdecgreensboro,com. You may also call the box office at 336-378-9646"