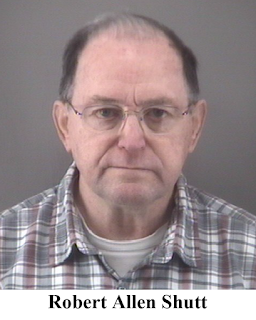 "On Nov. 4, 2015, a male victim reported that he had been molested by his Church Youth Leader, Robert Allen Shutt, 70, of 3453 Royalton Street, Winston-Salem.  This incident reportedly took place over the course of several years between 1992 and 1995 when the victim was between the ages of 12 and 15 years old.

Detectives with the Winston-Salem Police Department began investigating this report and the identified suspect, Robert Allen Shutt. As a result of the investigation, Detectives arrested and charged Mr. Shutt with 12 counts of Indecent Liberties with a Minor on December 11, 2015. Mr. Shutt was given a $250,000 bond and placed in the Forsyth County Detention Center.  His first appearance in this matter is January 7, 2016.  Mr. Shutt’s arrest photograph is attached.

Mr. Shutt was also arrested, on August 20, 2015 and charged with 3 counts of Indecent Liberties with a Minor. That investigation involved a different male juvenile who was also a member of the same church youth group.

As a result of the investigation, detectives arrested and charged Mr. Shutt on February 12, 2016, with 1 count of Indecent Liberties with a Minor and given a $5,000 bond. Mr. Shutt’s first appearance was set for March 3, 2016.

Detectives are continuing their investigation into this matter. Anyone with information about these crimes is requested to contact the Winston-Salem Police Department at (336) 773-7700 or Crime Stoppers at (336) 727-2800."