Police Looking for Man Who Escaped While being Questioned 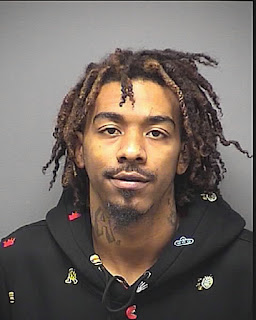 "GREENSBORO, NC (Feb. 9, 2016) – Greensboro police are looking for a man who escaped from police custody at approximately 2 pm today while being questioned in connection with some open warrants for arrest.
Dominique Jerell Blount, 23, of 4314 Hew3itt St., was being questioned by police at the 300 S. Swing Rd. sub-station when he left the interview room without police permission.
Blount was being questioned in connection with warrants for a larceny from motor vehicle that occurred on Dec. 29, 2015 on Veasly St.; and, warrants for arrest for Robbery with a Dangerous Weapon, Kidnapping, and Larceny of Motor Vehicle that occurred on Dec. 31, 2015 on the 200 block of Webster Rd. In the latter case, investigation revealed that the victim in the incident was known to Blount, and the offenses occurred during a pre-arranged drug deal.
Blount was not armed at the time he was in police custody.
Police and K9 units are searching for him in the vicinity of Stagecoach Rd. and his residence.
As a precautionary measure, Western Guilford High School has placed on a modified lock down. Also as a precaution, additional police have been placed at WGHS, Newcomer High School, and Guilford Elementary School.
Anyone who sees Blount should not approach him, and call 911 immediately.
Blount has a history of arrests that include narcotics violations, larcenies, and breaking and entering. He does not have a history of crimes against persons.
Officials from the Greensboro Police Department are investigating how the escape occurred.
Anyone with information about Blount’s location is encouraged to call Crime Stoppers at 336-373-1000 or text the tip to 274637 using the keyword badboyz. All calls to Crime Stoppers are completely anonymous, and may result in a reward up to $2,000."