New campaign challenges the country: ‘Betcha Can’t Not Smile’ after drinking a Cheerwine® 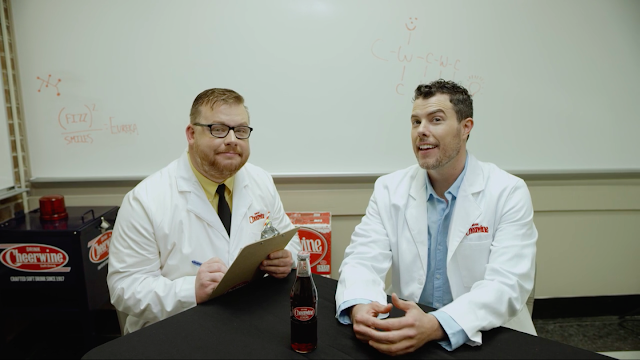 Iconic soda brand discovers a legendary ‘smile’ effect after consumption, launches ‘Cheerwine Labs’ to ‘scientifically’ test it and other theorems

"SALISBURY, NC - After 99 years of delighting taste buds, Cheerwine is boldly seeking to understand why anyone who drinks this unique soft drink can’t not smile, through a series of fun experiments this year in “Cheerwine Labs.”

Starting April 4, Cheerwine will debut its “Betcha Can’t Not Smile” marketing campaign via digital video, radio, social-media and at smile-inducing events across the Southeast where attendees can participate in the challenge.

“Cheerwine Labs” is the centerpiece of the ad campaign, with spokes guy Bo Stevenson testing if everyone – from real people off the street to a tough biker dude and a DMV employee – can resist smiling after tasting the family-owned soft drink from Salisbury, N.C. 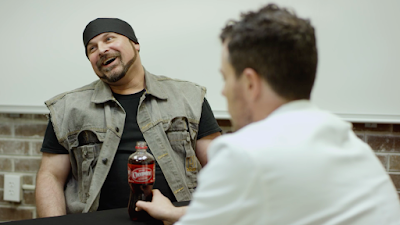 Complete with lab coats and lots of “sciency” visuals and terminology, Bo (joined by his lab assistant, Stan) will be seen testing additional theorems in “Cheerwine Labs” throughout 2016 as new creative from the campaign rolls out.

“We thought it would be fun to find out what it is about Cheerwine that makes people smile – whether they grew up with the brand or are trying it for the first time.  Perhaps it’s as simple as Cheerwine’s unique, legendary taste.  Or maybe it’s the emotional connection that Cheerwine has with fans,” says Joy Ritchie, Cheerwine’s head of marketing and 5th generation family member.

Cheerwine is daring people across the country to take the “Betcha Can’t Not Smile” challenge on social media, and share their “scientific findings” using the hashtag, #CheerwineLabs.

‘Betcha Can’t Not Smile’ Marketing Campaign
Cheerwine will roll out a series of new video ads on sites such as YouTube and other leading video-ad networks.   The new radio campaign will debut in all of Cheerwine’s existing markets, from its home in the Carolinas, up and down the East Coast and across the Southeast.

To bring the “Betcha Can’t Not Smile” challenge directly to new “test subjects,” Cheerwine will conduct “controlled experiments” in lab settings, as well as “field experiments” in surprising and fun places throughout the summer.

“Our new campaign truly captures what makes Cheerwine great, and that’s the combination of a unique one-of-a-kind taste and a cheerfulness that has always been a part of the experience,” says Cliff Ritchie, president and CEO. “The ‘Betcha Can’t Not Smile’ campaign is a fun, light-hearted challenge that encourages consumer participation and brings a little cheer to their day.”

The “Betcha Can’t Not Smile” integrated-marketing campaign was created by The Padgett Smith Project in Charleston, S.C.

CHEERWINE: Born in the South. Raised in a Glass.

Launched in 1917 by L.D. Peeler, Cheerwine is a soft drink with a flavor that always surprises. It is an iconic brand from Salisbury, North Carolina. Owned by the Carolina Beverage Corporation, the 99-year-old company is still privately owned and managed by the same founding family, five generations of whom have worked there. Cliff Ritchie leads Cheerwine as president and CEO. Available in supermarkets, restaurants, mass merchandisers and convenience stores in select states nationwide and on the website at cheerwine.com.:"