TRIAD STAGE OPENS 16TH SEASON WITH ARMS AND THE MAN 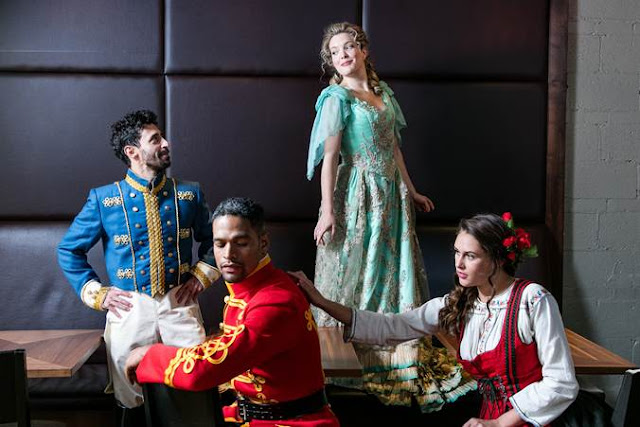 "(Greensboro, NC) — Triad Stage is kicking off its 16th season of producing professional theater on a lighter note, by asking the question “is all fair in love and war?” Somewhere far from anywhere, a young woman obsessed with romance novels longs for adventure, while just outside of town her fiancé is the hero of a raging war. But when the battle crashes through her bedroom window in the form of a retreating enemy soldier taking refuge under her bed, everything heroic gets turned upside down. In no time at all, her boudoir becomes a battlefield for two rival suitors. Arms and the Man runs Sept. 11 – Oct. 2, 2016. Opening Night is Fri., Sept. 16.

More information on the production can be found online at www.triadstage.org.

All performances are at Triad Stage at The Pyrle Theater, located at 232 South Elm Street in downtown Greensboro, North Carolina (between Market and Washington Streets).

Show times for Arms and the Man are 7:30 p.m. on Tuesday, Wednesday, Thursday and Sunday evenings and 8:00 p.m. on Friday and Saturday evenings. Sunday matinees are at 2:00 p.m. There are no matinee performances during previews.

Technically Talking, a behind-the-scenes discussion with members of the design team is Tuesday, September 13, immediately following the 7:30 p.m. preview performance.

The InSight Series with a noted expert who will be discussing the world of the play will be held on Sunday, September 18, immediately following the 2:00 p.m. matinee performance.

PostScript, a lively, open discussion with the cast, will be held on Thursday, September 22, immediately following the 7:30 p.m. performance.

About Triad Stage
Triad Stage is a professional not-for-profit regional theater company based in Greensboro’s downtown historic district. All Triad Stage productions are created in the Piedmont Triad of North Carolina using the best of local and national talent. Triad Stage gratefully acknowledges the support of its Season Sponsors: Blue Zoom, the North Carolina Arts Council, ArtsGreensboro and The Arts Council of Winston-Salem and Forsyth County.

Season passes and single tickets are currently on sale for the 16th Season. For more information about the 16th Season, please visit www.triadstage.org. The next production will be The Mystery of Irma Vep (October 5 – 16, 2016) at the Hanesbrands Theatre in Winston-Salem.

All Triad Stage productions feature the bold acting and breathtaking design that have been nationally recognized by The Wall Street Journal and by the American Theatre Wing, founder of the Tony Awards®, which named Triad Stage one of the top ten most promising theatres in the country as a recipient of the 2010 National Theatre Company Grant. Triad Stage has also earned accolades including “Best North Carolina Production of 2010” for The Glass Menagerie by Triangle Arts & Entertainment magazine; “One of the Best Regional Theatres in America”, New York’s Drama League; “Best Live Theater” (nine years running), Go Triad/News & Record and The Rhinoceros Times; and “Professional Theater of the Year” (2003, 2011), North Carolina Theatre Conference.

To purchase tickets or for performance information on Arms and the Man, call the Triad Stage Box Office at 336.272.0160 or visit www.triadstage.org."