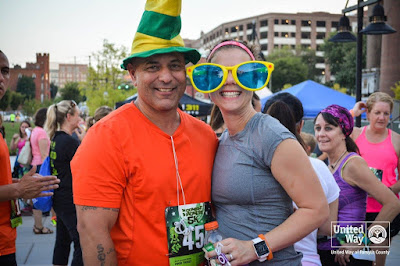 "United Way of Forsyth County kicked off its 2016 Annual Campaign at the 5th Annual Moonlight Madness Run Aug.26, 2016 at Bailey Park. This was the first year that the United Way sponsored Moonlight Madness which had previously been organized by the city of Winston Salem.

The Kickoff event is the start of United Way’s annual fundraising effort and United Way team members, partner agencies and volunteers were joined by more than 590 participants in the Fun Run and 5K race. Sponsors included Windsor Jewelers, Foothills Brewing, Mellow Mushroom, The City of Winston Salem, RAI and The Millennium Center. Over $14,000 was raised from registration fees . 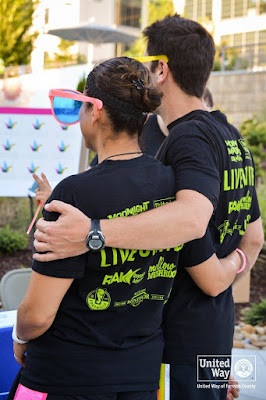 “It’s wonderful how the community supports the United Way mission of building stronger lives for everyone in Forsyth County,” says John Fox, Chairman, First Tennessee Bank Mid Atlantic Region and the 2016 Community Campaign Chair. “We are so fortunate to live in a community where more than 30,000 donors take part in the campaign each year. People in Forsyth County understand the value of investing in education, financial stability, healthier lives and basic needs of our neighbors.  They recognize that when they give through United Way, we can solve problems that none of us can solve alone.”

The theme of this year’s community campaign is “The Why Behind the Way.” The goals of United Way of Forsyth County reach beyond raising money, but also include educating community members about major issues and encouraging involvement.

“Although we’re proud of our successes, such as investing to help increase high school graduation rates from 71% in 2008 to 85.7% in 2016, many individuals and families in our community continue to struggle on a daily basis.  One in three children and one in four adults live in poverty and that impacts every aspect of their lives,” says Fox. “United Way collaborates and invests with partners to tackle the tough challenges and make a real impact.”

United Way’s annual campaign is a vital part of the organization’s work because the funds raised go to support local programs in the community. Last year, United Way Forsyth County funded forty-four local agencies with $10.8 million in funding focusing on the fundamentals of a good life: health, education, and financial stability.

United Way of Forsyth County believes quality of life relies on education, financial stability, health, and basic needs. All four are critical and interdependent to the collective success of our community. United Way of Forsyth County creates positive change in the community by aligning resources and strategic partners to achieve measurable, lasting results. We invest in improving student success and the high school graduation rate, increasing financial stability among lower-income individuals and families, broadening access to health care and prescription medications to the un- and under-insured, and providing critical assistance to those facing immediate crisis. Learn more about our work and rediscover the why behind the way at www.forsythunitedway.org."