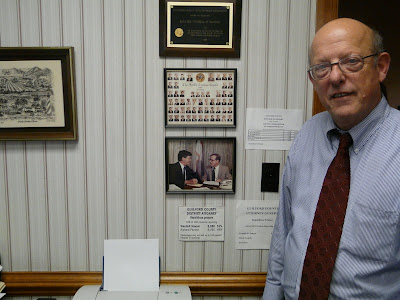 I spent almost two hours today with Wendell Sawyer, a Republican candidate for NC House, at his law office on Battleground Avenue in Greensboro. The seat Sawyer is seeking is currently represented by Democrat Pricey Harrison. To secure a place on the ballot in November, Sawyer must first defeat Republican opponent Jon Hardister, a 27-year-old mortgage company vice president who is running an energetic primary campaign.

Sawyer is something of an anomaly in politics. He attended junior high school in Greensboro with NC Sen. Don Vaughan and former Mayor Keith Holliday, but he doesn’t really circulate in the same social circles as power brokers. He won election to the NC Senate in 1984 and served one term, but said the state Republican Party didn’t give him any support or expect him to win, and he didn’t see eye to eye with party leadership once in office. He’s a fiscal conservative, but deplores the demonization exhibited by both major parties towards the other. He doesn’t talk much with the Republican Party organization in Guilford County and confesses, “I don’t know what they think of me.”

Most vexing, for some, he doesn’t campaign. That can come across as indifference, even a lack of respect for the electorate. It begs the question: Why should people give up their time and resources to support a candidate who won’t invest any effort in his own campaign?

Now 59, Sawyer said he’s too busy to campaign. He and his wife have six children, the eldest 27 and the youngest 16, with a couple in between in college. It would be hard to scale back his caseload without his business going bankrupt, Sawyer told me. “I work all the time. I work weekends. I work nights.”

“That’s something I have to address,” Sawyer said. “I asked my wife. She said, ‘You’ll just have to make it work.' In the long session, which falls on every odd year, you really have to spend a lot of time in Raleigh. That would be really difficult for me. I’ve got to be up front about it.”

If there had never been such thing as the Republican Party and the Democratic Party in American politics, elected officials might be something like Wendell Sawyer.

We started by talking about the state’s massive budget shortfall.

“You’ve got to either raise taxes or cut spending,” Sawyer said. “Of course, I’m on the side of cutting taxes.”

Sawyer is not among the Republicans that accuse the Democratic majority in the NC General Assembly of reckless spending. That’s a charge he doesn’t feel qualified to make. He would like to see a bipartisan commission established to review the state budget for waste, fraud and pet projects.

“I don’t see why anybody liberal or conservative, Democrat or Republican would disagree with that,” he said. “I don’t think anybody is in favor of waste, fraud and sweetheart deals.”

Sawyer expressed a sense of futility about making a positive impact on the political process.

“If the Democrats maintain control, it’s really hard,” he said. “You have the leadership that determines what gets considered. Republican bills are not going to be seriously considered. Whenever the Republicans are out of power, they tend to say we need to cut spending. Then they get power and they tend to soften on that. Look at what happened when Bush was in office.”

He drew an imaginary line graph in the air showing a pronounced incline.

Abuses by the leadership in both parties and unconstructive partisanship is a consequence of legislative districts being drawn to ensure that incumbents in both parties can win easy reelection, Sawyer argued. As a result, political competition is discouraged and the victors tend to represent the extremes of political discourse.

Again, Sawyer’s solution is an independent or nonpartisan commission.

“The question is how can you do it,” he said. “It would have to be people that both sides agree to. They would base it on community demographics and continuity. The Justice Department would have to approve it based on the Voting Rights Act. They’ll reject anything that appears to dilute minority representation.”

Sawyer said he sees it as imperative that office holders learn to get along with and listen to political opponents. Otherwise they run the risk of making a lot of noise, but remaining ineffective.

“When that partisanship thing gets ratcheted up, all reason goes out the window. ‘We’re going to kick your butt and show you who’s boss.’ I’m against it, both when the Democrats do it and when the Republicans do it.”

His fiscal conservatism has gotten him in trouble, even within his own party. Sawyer told me that the year he was elected, Republican politicians “roundly criticized” Democratic Gov. Jim Hunt for gasoline taxes. The transportation secretary under newly elected Republican Gov. Jim Martin proposed an idea called the Strategic Corridor that would — wait for it — require raising gasoline taxes.

“I was opposed to it,” the one-time state senator recalled. “They said, ‘Wendell, this is a Republican administration.’ I’ve always thought: If you believe in something, be for it.”

On some traditionally conservative issues, Sawyer is in line with other North Carolina Republicans. For instance, he’s against corporate incentives. He also opposes forced annexation, although he told me he can sympathize with municipalities that have to maintain services that are used by people who live outside their corporate limits commuting in to work. As he described it, people who work in cities are fleeing to subdivisions out in the county to avoid taxes and crime, and cities are chasing after them trying to recover revenue. Still, Sawyer told me he believes county residents deserve to have a say in whether they become city residents.

“I got in the middle of a fight over annexation,” Sawyer said. “It was over Colfax, of all things. “They didn’t want to be annexed. I supported them. They wanted to incorporate. We had a Senate bill for that. Greensboro and High Point went bananas because they had already carved it up between themselves.”

Sawyer is a Catholic, for whom faith matters. And his Catholicism gives him a compassionate and convicted sensibility that puts him at odds with the orthodoxies of both major political parties.

There’s one issue, he told me, that he would have to vote according to his conscience rather than what was most popular with constituents in District 57. That’s abortion.

“I consider myself a pro-life person,” Sawyer said. “That’s just an issue I feel very strongly about. And I would vote that way.”

I asked Sawyer for his thoughts on undocumented immigrants, considering that the Democratic incumbent, Pricey Harrison, has taken the politically unpopular stance of supporting undocumented students’ right to attend community colleges. That’s the opposite of many North Carolina Republicans. For example, four years ago, Guilford County Republican Party Chairman Bill Wright ran for NC House District 60 on a platform of “aggressively pursuing illegal immigrants, including checking legal status when someone is treated at a hospital” (to quote from a dispatch by News & Record reporter Mark Binker).

“I’m a Catholic,” he said. “I’m not a person who says I’m against immigrants, period. I’m not. They’re humans like us. That’s the starting point for me. I’d like to see a process where people could become citizens if they wanted to, and if they didn’t want to, then send them back. They do contribute a lot to society. They do jobs other people don’t want to do. If we deported them all, I think a lot of people would be hurting suddenly.”

As a lawyer whose practice includes a significant number of traffic cases, Sawyer said time and again he’s represented Hispanic clients who come to him without driver’s licenses because the state tightened its laws in 2006 to prevent people not authorized to be in the country from receiving driving privileges.

“I know that there are so many people driving around without driver’s licenses because I’ve had them as clients,” Sawyer said. “I ask them for a driver’s license, and they show me one that’s expired. They’ve been here working for many years, but they changed the rules so they can’t get their licenses renewed. They have to work and they have to have a way to get to work. When they have a driver’s license, then they get insurance for their car. They get their car registered. They’re driving around late at night in fear because they don’t have insurance and they’re afraid of getting in an accident. We need to bring this to the light of day. We need to make them citizens, so we can withhold Social Security taxes.”

“I’m not really sure what the other side that says they shouldn’t have licenses wants,” he continued. “You want them to walk to work? I know they’re response: They shouldn’t be there in the first place.”

There's something rare about Wendell Sawyer for a politician: He seems not to care that much that a position in which he holds great passion and conviction is out of line with the prevailing sentiments of his party and, most likely, the leanings of the electorate in his district.