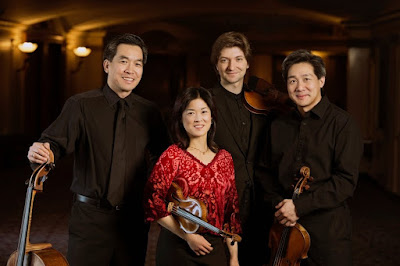 "WINSTON-SALEM — The Grammy Award-winning Ying Quartet will play a free concert that is open to the public on March 15 at at Salem College.
The Ying Quartet has established itself as an ensemble of the highest musical qualifications while striving to redefine chamber music as a meaningful part of modern everyday life. The Quartet’s hugely successful LifeMusic program commissions leading composers to write works that reflect contemporary American life, while its Dim Sum program features short works by Chinese-American composers.
In residence at the prestigious Eastman School of Music, the Ying Quartet tours widely and will perform throughout North America in 2015-16, from Anchorage to Phoenix and from Washington, D.C. to Los Angeles. Supported by the National Endowment for the Arts, the Ying Quartet participated in a much-lauded program that placed classical musicians in rural communities, and the Quartet is at the forefront of a groundbreaking movement to bring the magic and importance of classical music to audiences, communities, and college students nationwide.
Salem College continues to bring world-class artists and performers to Winston-Salem through this exciting series. Established in 2012, the June Porter Johnson Series for the Visual and Performing Arts has showcased the work of Bill T. Jones, Laurie Anderson, Jaune Quick-to-See Smith, and Twyla Tharp. This spring, we welcome the renowned Ying Quartet.


Made possible by a generous gift from June Porter Johnson. This free event has general admission seating and is open to the public. Reservations are not required."