David Holt’s State of Music – a PBS Show with Roots in North Carolina – Has Rapidly Growing National Audience: David Holt to Perform in Winston-Salem on April 17 and Greensboro on April 18 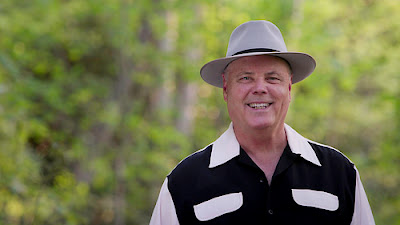 "WINSTON-SALEM, N.C. (APRIL 12, 2016) – David Holt’s State of Music, which debuted on North Carolina Public Television (UNC-TV) in early 2015, is expanding during April to be aired on public television stations across America, distributed by PBS. Although the show’s audience is rapidly growing, four-time Grammy winner David Holt will keep the show’s roots firmly planted in the traditional music of North Carolina’s mountains and foothills.

“The focus of State of Music is to showcase the incredible talents of modern musicians who perform traditional music,” Holt said. “We want to get people fired up about enjoying wonderful old-time and bluegrass music. Our show features performers who we believe are the future breakout artists of traditional music.”

Holt says no one personifies the next generation better than breakout star Rhiannon Giddens, a founder of the Carolina Chocolate Drops, who is featured during Season One of David Holt’sState of Music. Other artists showcased during season one include phenomenal guitar player Bryan Sutton, multi-instrumentalist and singer Josh Goforth, fiddle virtuoso Bruce Molsky, African-American gospel torch bearers Lena Mae Perry and Wilbur Tharpe (The Branchettes), and bluegrass super group Balsam Range.

“David Holt has devoted his lifetime to preserving and promoting the musical heritage of America,” Balsam Ridge banjo player Marc Pruett said. “His quest to dig deeper into the culture is apparent in his new effort, David Holt’s State of Music. We should all rally around this good man who uplifts and offers a current vision into those who are creating new music, as well as carrying our musical heritage forward.”

In every episode, each performer is presented in a setting that nurtured the music. Season One was shot on location across North Carolina: Bearwallow Mountain in Henderson County, Asheville in Buncombe County, Marshall in Madison County, Spindale in Rutherford County, Low Gap in Surry County, Canton in Haywood County and historic Horne Creek Farm in Forsyth County.

“The funny thing is that many of the artists on our show, who are among the finest musicians in the world, are not known to the general public nationally. We want to change that by presenting them in a relaxed, informal context and by filming in places that are important to the music,” Holt said. “Time and time again, those who see the show come away amazed by the depth and power of these performances and the stories we share.”

To celebrate the national launch of David Holt's State of Music, David Holt will appear with Jeff Little and Will McIntyre live at Muddy Creek Music Hall, 5455 Bethania Road in Winston Salem on Sunday, April 17 at 2 p.m. Tickets are $32.64 and can be bought here: http://www.muddycreekcafeandmusichall.com/#!blank/tsjcp

The celebration continues the next day when David Holt will appear with Laurelyn Dossett, Jeff Little and Will McIntyre live at Triad Stage in Greensboro on Monday, April 18 at 7:30 pm. Tickets are $30 and $75. Each $75 ticket-holder will be admitted to the venue at 6:30 and will receive an autographed DVD of David Holt's State of Music. David, Will McIntyre, and director Deni McIntyre will meet with them and talk about the show. Tickets can be bought at (336) 272-0160 or1-866-579-TIXX or http://triadstage.org/series/218/david-holts-state-of-music

A partial calendar of air dates and times of David Holt’s State of Music is available at davidholttv.org/broadcast-schedule.

About David Holt’s State of Music
David Holt’s State of Music premiered on North Carolina Public Television (UNC-TV) in January 2015. It was re-edited as a series of three half-hour episodes for added programming flexibility. The show was produced by the Will & Deni McIntyre Foundation. UNC-TV is the presenting PBS affiliated station. The show received an Emmy nomination for 2015 in the category “Documentary-Cultural” for the MidSouth region.

David Holt previously hosted the UNC-TV/PBS series Folkways that took the viewer through the South visiting traditional craftsmen of all kinds. He also served as host of The Nashville Network’s Fire on the Mountain, Celebration Express, and American Music Shop. He was a frequent guest on Hee Haw,Nashville Now and The Grand Ole Opry. Holt can be seen as a musician in the popular Coen Brothers film, O Brother Where Art Thou? He also hosts Riverwalk Jazz for Public Radio International.

In 2002, David Holt and Doc Watson won two Grammy Awards for Best Traditional Folk Recording for Legacy, a three-CD collection of songs and stories reflecting Doc Watson’s life in music. Doc and David toured together from 1998 until Doc’s death in 2012. More information can be found at davidholt.com.

Season Two of David Holt’s State of Music is now in production. Additional information about the show is available at DavidHoltTV.org or willanddeni.org. For more information, contact Will McIntyre by phone at (336) 399-2080 or email will@macfoto.com."