F**K IVY and Everything Else 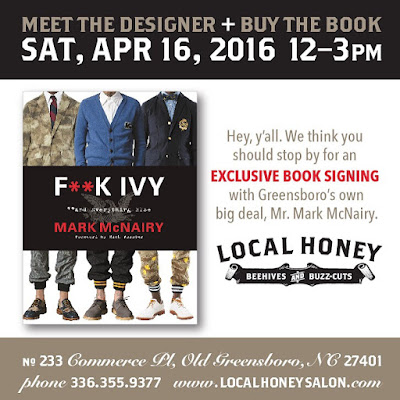 “What makes Mark’s vision work is that he is, at his core, a classic. He understands the rules, protocol, and tradition. Then he turns it all on its ear. That, for me, is the hallmark of a genius.”—Nick Wooster
“Mark is a rare gem that was found in the sediments of Southern soil. He has incredible taste and tone—and he’s a friend.” —Pharrell Williams
“I’ve long admired Mark for his subversive take on preppy. He’s one of the few designers who is able to mash up tradition with the street references and conceptual ideas successfully.” —Andy Spade
“Sometimes, especially in fashion, you just need a good laugh. Mark makes smart, witty, and awesomely cool clothes for guys with a good sense of humor who are looking for a good sense of their own personal style. Check that off your list. Mark McNairy is going to make you look great.” —Jim Moore, creative director, GQ
HarperCollins Publishers proudly announces the publication of renowned menswear designer Mark McNairy’s first book, F**k Ivy and Everything Else (Harper Design; On Sale February 16, 2016; $29.99, 176 pages; ISBN 978-0-06-237740-1). The creative vision behind Mark McNairy New Amsterdam, Woolrich Woolen Mills, and Bee Line and BBC Black, both collaborations with Pharrell Williams and Billionaire Boys Club, McNairy has long co-opted “fuck off” as a business model, and this book is an extension of his philosophy on clothing—and on life. In these pages, McNairy gives his unadulterated take on men’s style, manners, and life and how to live it with his usual candor and wry wit.
“Do not mess with perfection. Own a Zippo lighter, whether you smoke or not. You never know when you might need to burn a bridge.”
With a cult following of dedicated, fashion-forward young men around the globe, self-taught designer Mark McNairy has risen from an under-the-radar favorite to a driving force in contemporary American style. His collection of menswear and footwear, Mark McNairy New Amsterdam, is defined by a strong sense of sartorial history with an eye fixed on the future, and combines the designer’s vast knowledge of American and English tailoring tradition and complete dedication to craftsmanship.
“Don’t buy shit just because it is on sale, because most likely when you wear it, you will look like you should be marked down in the clearance section.”
In F**k Ivy and Everything Else, McNairy gives a fresh take on modern, yet traditional menswear. At once a style guide that provides invaluable style tips for today’s audience, it is also a witty riff of sorts on the 1965 Japanese classic, Take Ivy, which was republished in English in 2010. In fact, McNairy is largely credited with popularizing the Take Ivy style—that preppy, All American Ivy League look coveted by fashion insiders, which later evolved with McNairy’s own unique interpretation on the look. In these pages, McNairy covers the essential clothes every guy should have (a navy blazer, Church’s Shannon Black Polished Binder), offers tips for daily life (always carry a pen—and always have cash on hand), and presents style pointers that are, put simply, indisputably right, such as wearing only one piece of interesting clothing at a time.
“Hats are not for every guy. If you’re gonna wear a hat, wear it. Do not just put it on. Please remove your hat while dining, unless you are Dwight Yoakam.”
F** Ivy and Everything Else is the style guide for our times, laying the groundwork for dressing well and good behavior, yet encouraging readers to think for themselves, to see the humor in life, and not to take themselves too seriously. As he writes, “Do not be afraid to break the rules . . . But you’ve got to know them before you break them.”
MARK MCNAIRY is the creative vision behind Mark McNairy New Amsterdam, the creative director for Woolrich Woolen Mills, and the creative director of the Bee Line and BBC Black, both collaborations with Pharrell Williams and Billionaire Boys Club. He has collaborated with brands such as Keds, Timberland, Bass, Adidas, Heineken, and Zippo. The former creative director of J. Press, Mark has been named a Woolmark Prize finalist, GQ’s best new menswear designer in America, and Complex’s man of the year in style. A member of the CFDA, he lives in Los Angeles. Shop.markmcnairy.com "